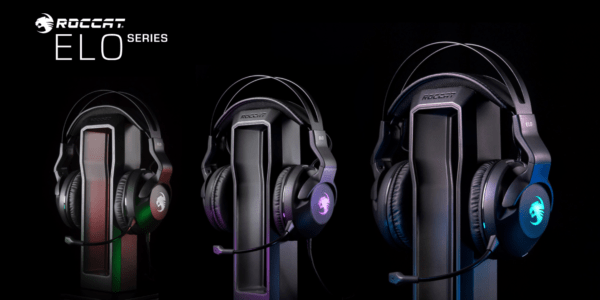 ROCCAT’s Elo series includes three different headsets for PC gamers to choose from,  each designed with premium, comfort-focused features such as memory foam cushions  and a self-adjusting floating metal headband – offering a unique, durable, and weightless fit. The X Stereo is a light-weight stereo headset with a MSRP of $49.99. The 7.1 USB ups the ante with premium 7.1 channel surround sound, ROCCAT’s AIMO intelligent lighting system, Variable Mic Monitoring and a USB connection for a MSRP of  $69.99. The 7.1 Airtakes things even further with wireless connectivity, Turtle Beach’s patented Superhuman Hearingsound setting for a competitive advantage, and a long lasting 24-hour battery life for a MSRP of $99.99. All three Elo series headsets will be  available at participating retailers worldwide on October 4, 2020. Pre-order now at  ROCCAT.org.

“The Elo headsets show the result of what happens when you combine the best of  ROCCAT and Turtle Beach, and this is just the first wave of our new precision-focused  PC gaming accessories,” said Rene Korte, Head of PC Products at Turtle Beach. “The Elos look sleek and sound amazing, and we still have new additions to our award-winning

Vulcan series keyboards on the way, along with new mice and more – all designed to  deliver an amazing desktop ecosystem that makes ROCCAT the PC brand for all serious  PC gamers.”

offer PC gamers some of the highest performance and best-looking PC gear, all designed  to provide a competitive advantage while making gaming more immersive and  enjoyable, and is a core part of achieving our target of 10-20% annual topline growth over  time.“

Full details of ROCCAT’s all-new series headsets are below, and more information  can be found at ROCCAT.org.

The Elo 7.1 Air is the top-end wireless model of the series. It offers exceptional, immersive 7.1 channel surround sound via powerful 50mm drivers and adds Turtle Beach’s  exclusive Superhuman Hearingsound setting for a competitive advantage. Elo 7.1 Air uses ROCCAT’s Stellar Wireless technology for a dependable wireless connection as good  as, and sometimes faster than, a wired connection, as well as a long-lasting battery that  averages 24-hours of use. The Elo 7.1 Air is also a new addition to ROCCAT’s AIMO product portfolio and will be available for a MSRP of $99.99.